I am not sure what it is about kids and their infatuation with shoving things up their nose at some point and time in their lives.   But all kids usually do this.   My kids are no exception to this, they have had their turn of embarrassment with this issue.

Logan found a screw from a computer and shoved it up his nose.  Fortunately, we were able to use some tweezers to pull that out and all was well.

Caylea, on the other hand, was not that lucky, her experience was a little more traumatic.

Caylea was about 4 years old and just cute as a....... button.  HA HA HA  :)
We were all at home just relaxing in the living room watching TV.  I heard Caylea blowing her nose in the other room.   Nothing wrong with that, right?   Then she continued to blow her nose... and continued... and continued.   I asked "Caylea, what are you doing?", she says "Nothing!" as she ran from my room into the front bathroom.   I said "Caylea, come here, what are you doing?"   She came out of the bathroom and there was blood running down from her nose and she was completely freaking out and then I freaked out as well!  We ran to her and asked her what happened.  After some time she admitted to shoving a button up her nose.

These are the events leading to the incident as far as I can piece together.   She was walking along and saw a button on the couch (it had come off a pair of pants).  She saw said button and thought to herself "Hey it would be cool to stick this in my nose and make myself look like a hippo" (literally she admitted to this, you know hippos have big nostrils).  So she got the button in her nose and I am assuming was very pleased with her hippo looking nostril.  But then it was not so fun because the button was stuck......  very stuck.   So the only thing the 4 year old knew to do was to try and dig it out.    She succeeded to shove the button very far into her nose and this made it bleed and caused lots of PANIC!   By the time we found out, it was so far up in her nose, we couldn't reach it at all.

We all loaded up in the car and headed to the ER and wondered how we would explain this to the doctor.   I am sure the doctor got a giggle out of our situation.  He kindly got some very large tweezers and got the button out in no time.   Thank goodness!

Having twins has its advantages!  Brianna saw this traumatic event and she NEVER shoved anything up her nose!

The Case of the Missing Pants

It is never dull at our house, and I literally mean never.

I never know what will be next with three dogs, one cat, 10 year old twin girls and one teenage son.

If you know me very well, you know that I have a very sarcastic sense of humor and to my children I am sure that sometimes this is frustrating.

My teenage son, Logan, is in full force summer mode.   He sleeps a lot, stays up late, and hangs out with friends almost every day.

One day, this past week, he was taking a shower about, hmmm, I believe it was 8:00 pm.   When he came out of the bathroom in his boxers, he asked me "Mom, where are some of my pants?"   Well, I guess Mom is in summer mode too because I had no clue where his clean pants were.  Why would he need pants, it's summer, isn't he living in his PJ's?  So, I told him "I have no idea where your pants are, I haven't worn them".  This is my response most of the time to "where is this, or where is that".  Then I told him "Just go naked".     The girls and I found this extremely entertaining and just laughed and laughed.   :)

Well, he didn't appreciate this response and just sighed at me, sat down at the computer and didn't say a word.  About 15 minutes passed, and out of the blue, Logan says "Mom are you serious about my pants?"    At this point the girls and I broke out into full laughter.   It was hilarious.    Then Logan says "It really isn't funny, I wanted to go hang out with friends and I need pants".     We then laughed so hard that we cried!

Now, I am not sure why Logan's misfortune was so funny to the females in the house, but it was the funniest thing!   Poor Logan, he has to deal with three girls, he really does put up with a lot!   He deals with it very well.   :)

But just to ease your mind, I found his pants and he went to hang out with friends.    :)

Sometimes my kids make me want to pull my hair out and I am sure sometimes I make them want to pull theirs out too.   But we all love each other so much.   They are hilarious and make me smile every day.  What a blessing!

Psalms 127:3  Children are a gift from the Lord; they are a reward from Him.

Posted by Unknown at 9:01 PM No comments:

A lot has changed since I blogged last time...... to say the least.

My world was turned completely upside down, shuffled up and then put back down.

Divorce is horrible, ugly thing.  It not only effects the two people getting divorced, but also kids, grandparents, friends..... the list goes on and on.   My divorce was final in March and from about July to March it was a whirlwind of emotions.    There were sad times, mad times, crazy times and confused times.   When you are married to someone for 17 years and they are all you know, it is almost impossible to imagine your life without them.   But sometimes..... there just isn't any way to fix a situation.  The only thing you can do is move on and pick up the pieces.

When I thought that all was lost these are the things that got me through.   My kids, my family, my true friends, and most importantly my faith.   Throughout this whole thing, my faith has grown by huge leaps and bounds.   I came to realize that no matter what was going on in my life, God has blessed me and continues to bless me every day.  I have three wonderful kids, a huge supportive family, great friends, a great job, health..... the list goes on and on.  How can I complain that things didn't go exactly the way I planned?  I am not the one in charge, God is!   He has a plan for me that is far better than anything that I could come up with for sure!

So I have decided to pay attention to the important things.    The "small" things in life that are really the BIG things.  The joy I get when singing very LOUDLY to music with my girls in the car, taking Logan to a movie, laughing, acting completely goofy and joking with my kids, seeing a beautiful sky that God has created for us, enjoying time with my parents, laughing so hard with my friends until my stomach hurts.....  again, I could go on and on with examples like these.   I also realized I needed to thank God every day for all of the blessings he has given me because I am blessed beyond measure!

So yes, my life was flipped and shaken up, but maybe, just maybe it was flipped the RIGHT way.  God has great things in store for me.  :)

A friend of mine sent me this scripture, it is great and I need to read this every day! 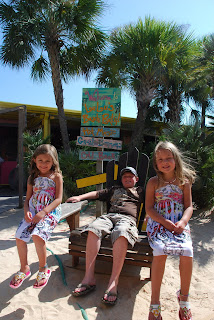 We always have to go to Lulu's and eat and shop when we come to Gulf Shores. It is such a great place to go. It is a restaurant by Jimmy Buffet's sister. You eat outside and there are sandy places for the kids to play and all that. The gift shop of course is a favorite of mine. I could shop there all day long. But the guys eventually make the women leave. LOL I got the chicken tacos, they were pretty good. My favorite thing was our fried green tomatoes appetizer, yummy stuff. They had this awesome dipping sauce for it that was delicious! If you are ever in Gulf Shores, you should try Lulu's but make sure you go before 4 because the wait at night time is crazy. The first year we learned that by going at night and they told us it would be a three hour wait. So go early! :)
Posted by Unknown at 6:47 AM No comments: 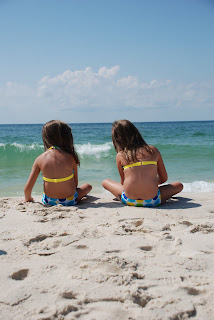 This is my favorite picture to take of the girls on the beach. It makes it look like it is just them and the beach! :) We are still having a blast on the beach. Not ready to go home yet, of course. My girls are getting so tan! And luckily, knock on wood, noone has gotten burned yet.
Posted by Unknown at 6:43 AM No comments: 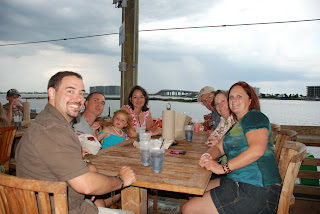 We went to one of our favorite restaurants tonight, Tacky Jacks. You eat outside and it is nice with the breeze. You sit on these really tall chairs. We waited on a table outside for about 30 minutes or so, it wasn't too bad. As we were leaving it starting pouring down rain. But we made it to the car and back to the condo. Billy went down to try out the sauna. I went there for a few minutes, but I just don't think it is my bag, baby! :) Larry Jess and Deborah went down to the gym. I am just chillin' in the room with the kiddos. Thinking about going to bed soon and getting up early and looking for shells on the beach. Oh yeah, and the souvenir shop there had the best jewelry I have seen so far. So yeah, I spend too much money! Not news to anyone. LOL
Posted by Unknown at 9:05 PM No comments: 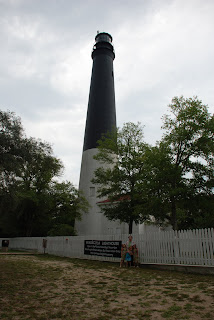 Right down the road, there was the Pensacola Lighthouse. My mom has always wanted to see one, and we didn't realize there was one right down the road from where we were. It wasn't open to go in, it is only open to the public on Saturdays. My mom doesn't like heights so she didn't want to go up in it anyways. It was a pretty place with a house by it. The papers said it is haunted too! At night, they tell ghost stories and such when you go in it. Anyways, we walked around it and took pictures. It was a nice place. This is a picture of the girls and my mom with the lighthouse.
Posted by Unknown at 8:58 PM No comments: